They had not saved enough money.

The simple (obvious?) solution to their savings shortfall was to downgrade their lifestyle. The math behind this idea is relatively simple:

If you don’t have enough money at your current level of spending to get through retirement, spend less money.

However, for these two clients (and likely all humans), spending less money was simply an unimaginable impossibility. Neither of these two unrelated clients was willing to give up anything in their life. (Or perhaps more accurately, they refused to do the exercise of simply examining where their money was going.) And thus, every part of their spending was an essential need – from the multi-bedroom condo in West Los Angeles, to the rotating luxury automobiles.

Is that not strange? Why did these clients feel that these things (and all things they spent money on) were so essential? Why were they so unwilling to make any reductions to their lifestyle?

Given that both these clients were facing an identical scenario, I decided to find supporting evidence for my hunch (which I’ll get to in a moment). The info I sough was easy to find. Take a look at the following graph from PayScale. 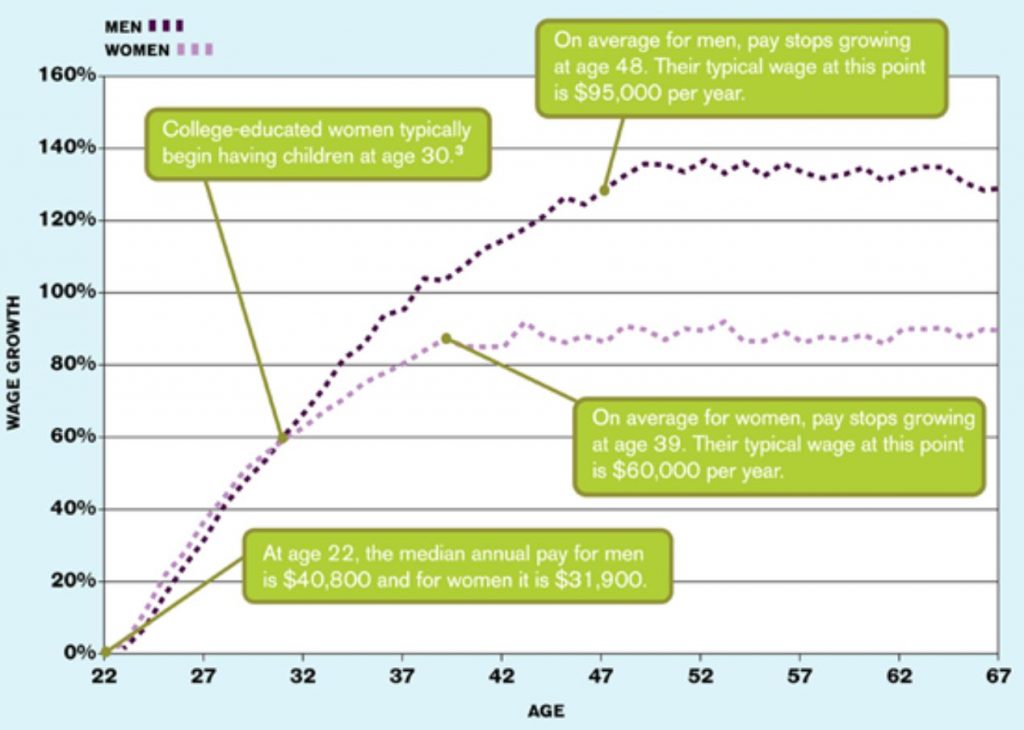 On average, earnings peak well over a decade before retirement. What’s worse, the figures are nominal. This means that these figures do not account for the impact of inflation.

Incorporating inflation would transform the last decade of working years from a flat trajectory into a downward decline. See below for a rough approximation of what a lifetime earnings trajectory may look like when considering inflation. 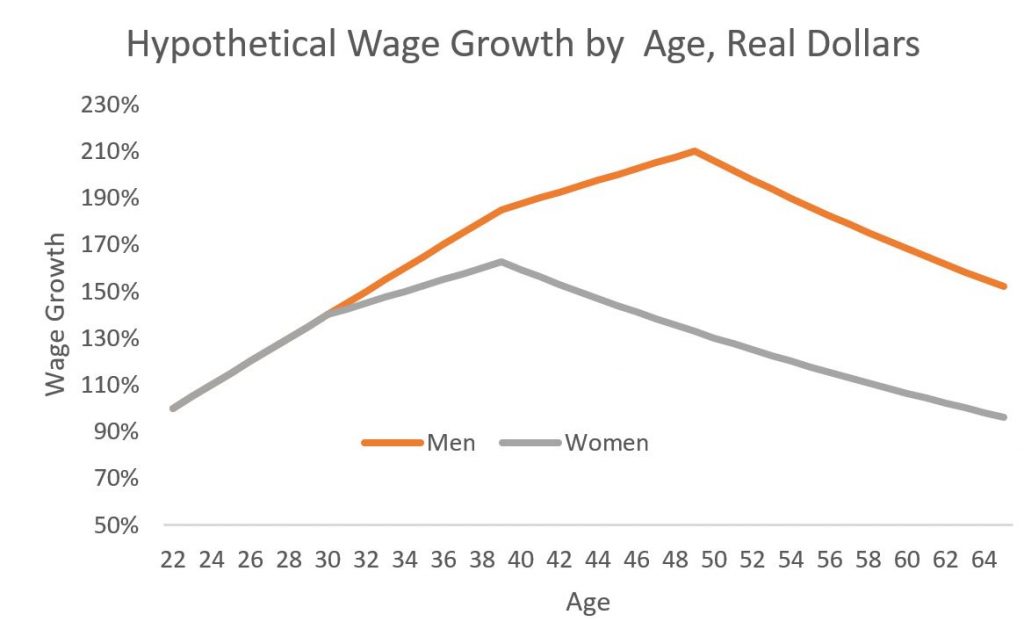 Let’s put this data to work into a hypothetical case study to showcase what is happening to American’s retirees.

This happens every year; every year, American Jane gets a raise – and every year Americn Jane experiences in lifestyle creep. As Jane’s income goes up, so does her spending. 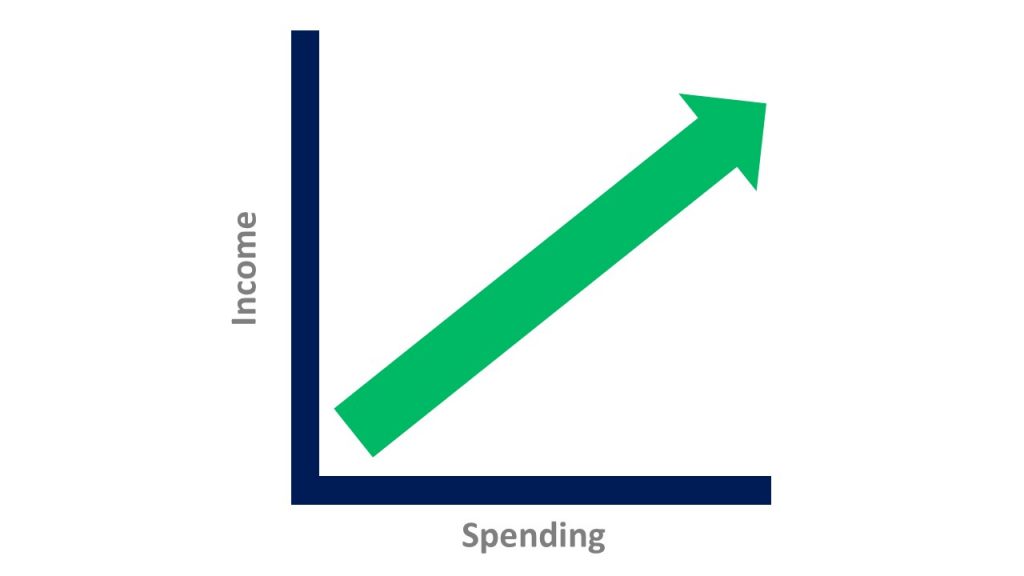 At age 39, (after 18 years of consecutive raises), American Jane is accustomed to a certain lifestyle. She drives a luxury car. She lives in a luxury apartment (or pays ever-increasing property taxes on her home purchase). She buys organic groceries, and she takes 5-star vacations every year.

Then something happens. At age 39, American Jane stops receiving raises. Her salary remains more or less the same for the rest of her life. That’s more than a decade of no wage growth! And remember, these are nominal dollars. Her salary stays the same before considering inflation.

Why does Jane experience no wage growth? Maybe this is because American Jane switches jobs to achieve a better work-life balance – or maybe because she’s laid off and replaced by someone younger. Her new job isn’t earning her any less money – but she’s not making any more money either.

American Jane’s income and lifetysle are fixed. Neither is growing.

American Jane is spending more dollars on her lifestyle each year, even though her lifestyle remains the same. This is because the same lifestyle costs more each and every year because of inflation.

With a fixed income and increased spending (to maintain the same lifestyle), savings rate decline. Late-stage earners may even be eating into their savings to maintain their lifestyle.

As a financial planner, I have seen this one more than one occasion. Late-stage earning bankers and doctors raiding their brokerage accounts, and taking out HELOCs to pay for a home remodel, a child’s education, or a new car.

The second consequence of stagnant wage growth and inflation is that the client has gotten used to a certain lifestyle. Maybe that means luxury apartments, luxury cars, and luxury vacations. In short, the client is accustomed to these luxuries; this is what the client expects.

Given the expectation for a certain standard of living, the client is not willing to decrease to their style – either because the client doesn’t understand the impact of inflation on a fixed salary, or doesn’t care. They want what they have and the won’t settle for anything less – the numbers be damned!

Now that we know the problem of inflation on late-stage earners experiencing stagnant wage growth, how do we – as financial planners – solve this problem? Do we bother explaining to the client the impact of spending given stagnant wages and inflation? Good luck with that!

Humans are accustomed to a certain lifestyle (or rather they don’t handle change well). Therefore, it’s likely a hard sell getting client to tighten their belt after decades of them doing the opposite.

As financial planners, we know that the math is relatively simple. Pay now or pay later.

I think for those like American Jane, the game is over. It’s too late for them. How does one communicate to a client who has been driving a new Lexus for two decades that such spending is no longer an option?

Financial Planner: Then you need to do Y.

Financial Planner: Then you have to do Z.

Financial Planner: Then you don’t get X.

I don’t think you do. Instead, I think you impress upon your younger clients that they need to save more money now for the reason that not only will they earn nothing in retirement (to fund their living expenses), but that clients will earn less money than they are today in the future over the course of their working career. As such, (younger) clients need to increase their savings even more so today because they may not be able to do so in the future.

Is a One-Day Financial Review Right for You?

Get in Touch with Jon Luskin, CFP®

Sign Up for New Blog Posts & Podcasts Delivered to Your Inbox

Who's got a silly analogy about #investing in municipal #bonds?

While you could dine at an all-you-can-eat steakhouse, you may not neccesairly want to.

All else being equal, owning a big, expensive home can make (early) #retirement more difficult.

Is the One-Day Financial Review right for you?