The San Diego Foundation bills itself as

grantmaking for San Diego nonprofits and our community.

As a San Diego resident, I can’t help but like that mission statement. In fact, I’m even disposed to help the Foundation achieve its mission. How? With a portfolio analysis, of course!

As of June 2017, the Foundation’s Endowment Portfolio had 23.7% allocated to asset classes that could be considered inappropriate. With 20% in alternatives and nearly 4% in commodities, the investment committee has – it could be argued – failed to live up to its obligations as a fiduciary. Specifically, the members did not conduct the due diligence that would have helped them understand that a $400 million endowment simply does not have sufficient resources to compete effectively when it comes to these two asset classes.

Consdier David F. Swensen, arguably the greatest endowment money manager of all time – and someone who literally wrote [amazon_textlink asin=’B000WJSB50′ text=’the book on endowment investing’ template=’ProductLink’ store=’jonluskin-20′ marketplace=’US’ link_id=’e89d85bf-cadd-11e7-8517-3deec24048fb’] – says so. Swensen maintains that if you’re not Yale (with its multi-billion dollar endowment portfolio), don’t pretend to be Yale. Instead, stick with low-cost investments.

Admittedly, that’s just one (very smart) man’s opinion. But just because he – or anyone else for that matter, including yours truly – says something, that doesn’t mean it’s true. As is generally the case when it comes to finance and investing, it’s the bottom line that counts. So, what does it tell us? Let’s take a look by running the numbers!

On average, portfolios comprised of low-fee investments tend to outperform those that are laden with high-fee alternatives assets. Even after wading through individual case studies, it is difficult to find endowment portfolios in the latter category, with less than $1 billion under management, that have fared better than average. This suggests there are few positive outliers among the endowments that hold high-fee investments. Indeed, in the case studies I’ve come across, I’ve not found any.

Then again, maybe the Foundation is an outlier. Despite the relatively small size of the portfolio it oversees, perhaps the investment committee has found a way to outpace the competition. Again, we can only know for sure by looking at the numbers.

Before we do this, however, we need to consider the Endowment’s stock-bond mix. Why? Because one of the principles of investing is that risk and return are linked. In other words, the more money you want to make, the more risk you have to take. Having a better sense of the risk the Foundation is assuming can put the returns they are generating into perspective.

One way to do this is to compare the performance of the Endowment Portfolio to that of a hypothetical low-fee counterpart, which includes only stocks and bonds. This means translating the Foundation’s asset allocation mix into a low-cost equivalent comprised solely of conventional asset classes, like so:

The indices on the left reflect the reported allocations. Those on the right represent “plain vanilla” comparables. For rebalancing purposes, the global stock index was broken down into three segments: domestic, international developed, and emerging market. The Endowment’s fixed-income exposures were replaced with a 50/50 mix of U.S. Treasury Bonds and TIPS, while its alternative and high volatility strategies were swapped for U.S. stocks. Below is the end result:

So, how did things turn out? For the 10-year period through June 30, 2017, the Endowment generated an annualized net return of 4.4%. Over that same span, the low-fee portfolio gained 6.84% per year (after factoring in an annual six-basis-point fee for expense ratios) – a difference of 2.4% annually over 10 years. Had the investment committee chosen a more appropriate strategy, they may well have had an extra $100 million on hand today. 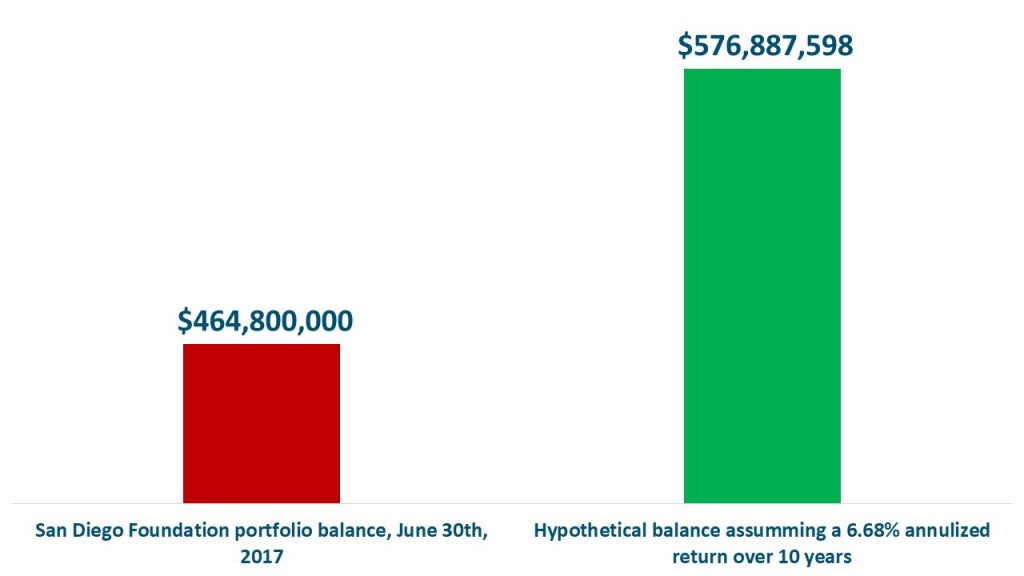 Unfortunately, the Foundation’s decision to keep things complicated and costly may have left it short of substantial resources that could have been put to good use. Instead of having more money to spend on helping the San Diego community, it ended up subsidizing high-cost financial intermediaries who sold it a bill of goods.

Is a One-Day Financial Review Right for You?

Get in Touch with Jon Luskin, CFP®

Sign Up for New Blog Posts & Podcasts Delivered to Your Inbox

Who's got a silly analogy about #investing in municipal #bonds?

While you could dine at an all-you-can-eat steakhouse, you may not neccesairly want to.

All else being equal, owning a big, expensive home can make (early) #retirement more difficult.

Is the One-Day Financial Review right for you?